CAUSES OF WORLD WAR ONE: the 5 empires

THE TASK PART A: RESEARCH
There were five great Empires of old Europe, break into five groups and investigate one each.
First, your teacher will assign each group an Empire to investigate:

Now, you must read the information provided, examine the images and answer the following questions:

1. Who was the leader? Would people in that country have pride in their leader? Why/ why not?
2. How big was their empire? What does that tell you about its wealth and power?
3. What problems were they facing in 1914?
4. When you complete the task you must switch into EXPERT GROUPS and complete the tasks at the bottom of this page.

PROBLEMS: Britain may have called itself the 'Land of hope and Glory' however it had a number of problems at home. Unemployment was rising and ordinary workers were protesting and rioting in the streets. However the biggest problem England faced was its closest neighbour: Ireland. Most Irish people were tying break away from the British Empire and by 1914, it looked as if war was ready to erupt. 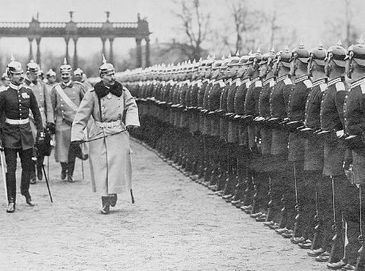 Kaiser Wilhelm examines his soldiers
BACKGROUND
In 1914 Germany, as a country, was less than fifty years old. Before 1870, no such country existed as it was a collection of small states with individual rulers. However, the state of Prussia joined all of them together to make one strong and powerful country. Germany. Their new neighbour France wanted to stop this and in 1871 fought a bitter war with the new country. However Germany were victorious and even took some French land for their new nation.

PROBLEMS Kaiser Wilhelm was jealous of the mighty British Empire. He decided that Germany needed to have a 'place in the sun' and should become a world superpower too. Like Britain, Germany had many problems of its own. Workers were unhappy as wages were low and food was expensive. Some anti-government groups were suggesting they rise up and overthrow Wilhelm in a revolution. He had little interest in working with these groups.

THE TASK PART B: PUTTING IT ALL TOGETHER

Once you have collected all of the necessary information and all answered all of your questions, you must form into EXPERT GROUPS where each group has an expert on each Empire.


STEP ONE: Take turns in reading your findings to each other and note down a summary of the leader, the size and wealth and problems facing each Empire.


STEP TWO: Download this map of the world below and use a different colour to shade in the colonies, or land owned, by each empire. Be sure to include a key, indicating which country corresponds to which colour.

Download File
STEP THREE: As a group, examine the map and the research gathered on each empire, and answer the following questions in your exercise book